At Coveo, we deal with an enormous amount of data on a daily basis. With data growth, our data platform has also grown from a single team a few years back, to more than 3 teams and 20 employees. With this growth, we also gave ourselves the mission of democratizing data across our organization and allowing more and more external teams to access and experiment with the data we capture.

The challenge we rapidly faced was that we had to offer more and more support to these external teams on how to automate some of these applications and scripts they were developing over the data. Most of these stakeholders are often really proficient with SQL and Python, but have less knowledge and experience with CI/CD, infrastructure, and monitoring.

To solve this problem, we started looking at some solutions that would allow these teams and individuals to easily deploy and run these different workloads in production, without having to develop an in-house solution that would require a lot of engineering time and maintenance.

After investigating multiple solutions to solve this problem, a clear winner stood out for us: Prefect.

Prefect is a cloud scheduling solution that allows developers to easily run Python scripts without having to worry about managing the underlying infrastructure.

The easiest way to build, run, and monitor data pipelines at scale. [1]

Prefect offers 3 different alternatives on how you can use their platform. The first one is Prefect Server, an open source solution that makes you host the whole Prefect UI and scheduler directly in your infrastructure. It’s open-source but you’re responsible for everything.

The second option they offer is Prefect Cloud, which is a fully hosted solution of their platform, allowing you to run scripts directly in their cloud without having to worry about managing anything. You simply provide a script, and it will run in their infrastructure.

The third option is what Prefect calls the hybrid model. You basically benefit from all the capabilities available in the Prefect Cloud offering, but the scripts are run in your infrastructure using a Prefect Agent. This is the solution we opted for at Coveo. It was the best choice to make sure we stayed compliant with our security best practices, making sure customer data would never leave our Virtual Private Cloud.

Sentry is an error monitoring tool that enables developer teams to be notified rapidly when issues happen in their applications. At Coveo, the usage of Sentry is already widespread and most R&D teams are using it in their services.

Even though Prefect comes built-in with automation that allows notifications in Slack in the event of the failure of a flow, we felt this was not providing us with enough insights regarding what went wrong without having to go through our internal logs to investigate. Once the initial Prefect implementation was completed on our side, it rapidly became clear that we needed to implement Sentry in Prefect to make sure that the different teams using it would be alerted if anything went wrong in their code.

In this blog post, I’ll show how it’s possible to integrate Sentry in a Prefect Flow, using tools such as Terraform, the Python Sentry SDK, the Prefect SDK, and Slack.

First you’re going to need to create some Sentry Terraform resources. If you’re not using Terraform, you can obviously skip these steps and simply do them manually in Sentry.

To create Sentry Terraform resources, it’s important to initialize a Sentry provider. To do that, we internally have a shared SSM parameter available in AWS that contains a working Sentry token that can be used to retrieve a Terraform data object to initialize our Sentry provider. If such token isn’t available in your current infrastracture, simply create an SSM parameter and put the Sentry token in it. This provider will allow the creation of Sentry resources in the following steps.

Now that a Sentry provider has been created, we can start creating resources. First, let’s create a project.

If you were to perform a terraform apply command at this point, you would see a resulting project in Sentry that is ready to receive incoming events. 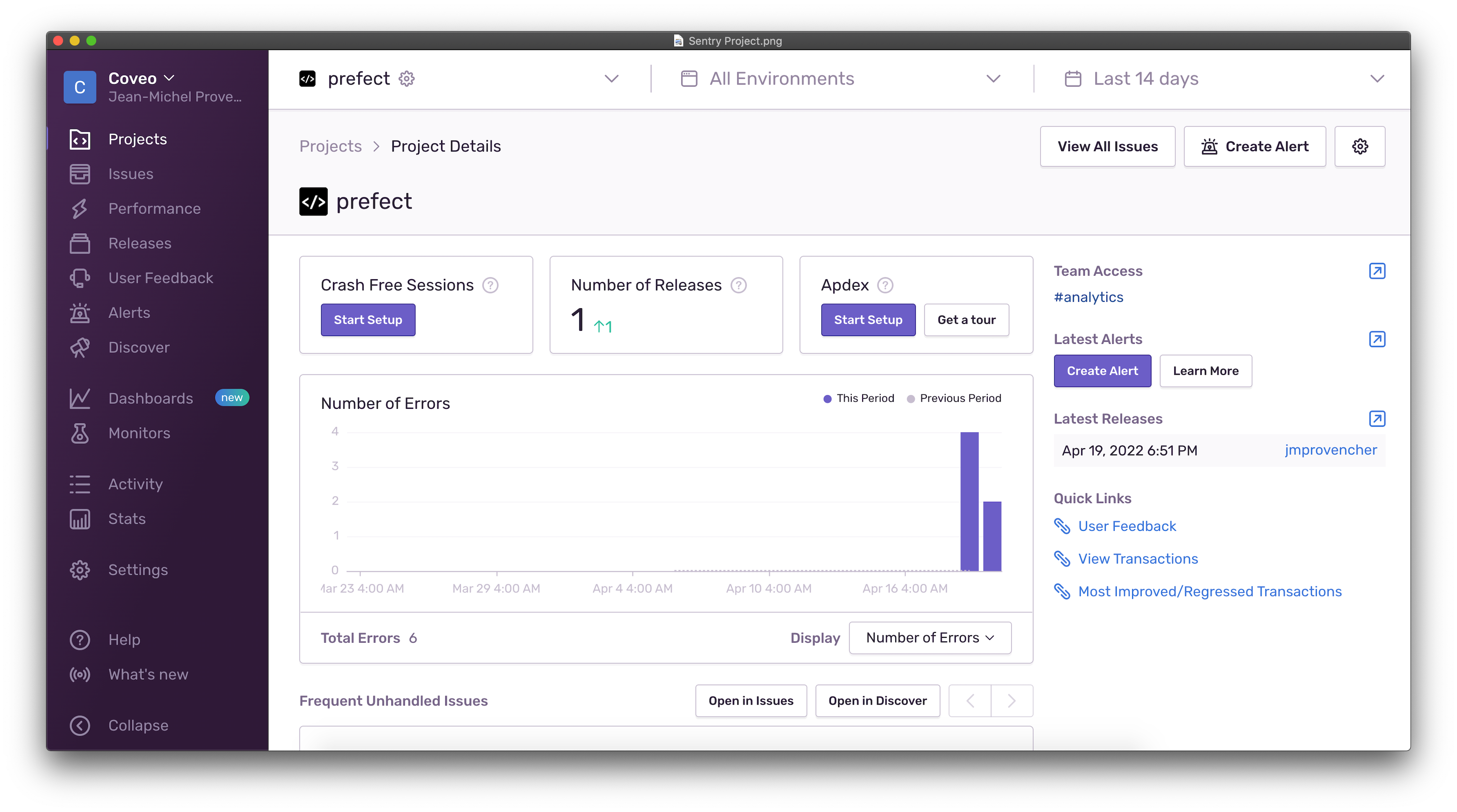 At this stage, we need to retrieve the Sentry DSN key associated to the project to pass it to our Prefect Flow so that we can initialize it in Python.

That’s it, we’re pretty much set up for what was needed on the Terraform infrastructure part.

Creating a Base Task With Sentry Built-in

As more and more teams started adopting Prefect at Coveo, we felt that it is important to provide basic capabilities and initializations for these internal developers. We wanted to make sure that their ramp-up and adoption of the tool was as easy as possible, enabling them to focus on the features they have to implement rather than plumbing around it.

Creating this kind of task can be achieved simply like this.

The task decorator is an easy way of creating a task in Prefect. Later on, we’re going to see how we can re-use it in another flow. For the moment, let’s focus on what the init_sentry method does.

The first part of this method actually checks for different environment variables that should be set on this flow run to properly initialize Sentry with tags. These tags will make it easier to report and understand where the exception is coming from. By having these different environment variables, it’s possible to dynamically set tags such as the region where the code is running, the environment it’s in, and what is the latest commit id for this code.

This kind of metadata enrichment will be super useful for developers when they investigate errors in Slack if anything unexpected happens with their scripts.

After that, an SSM client needs to be instantiated using Boto3 to retrieve the previously created SSM parameter that contains the Sentry DSN that is needed to initialize the Sentry SDK. Once the SDK is initialized, adding tags and context to Sentry using the provided context object from Prefect can be achieved in a simple manner using the set_tag and set_context methods. Metadata such as the flow run id and the parameters that were provided to the flow might bring more clarity on why the exception occurred in the script.

Voilà, we now have a base task that will automatically bootstrap Sentry at the beginning of a flow and that can be easily imported in any flow.

Running this flow will result in an exception every time, showing up in Sentry with all the provided metadata. However, if we want to receive alerts directly in Slack when an exception occurs, there is one last thing to set up.

To make sure any events coming in Sentry trigger an alert in a Slack channel, a Sentry plugin resource has to be created in Terraform.

After applying this resource with Terraform, when running a Prefect Flow, a notification will be sent in Slack in the channel that was specified. 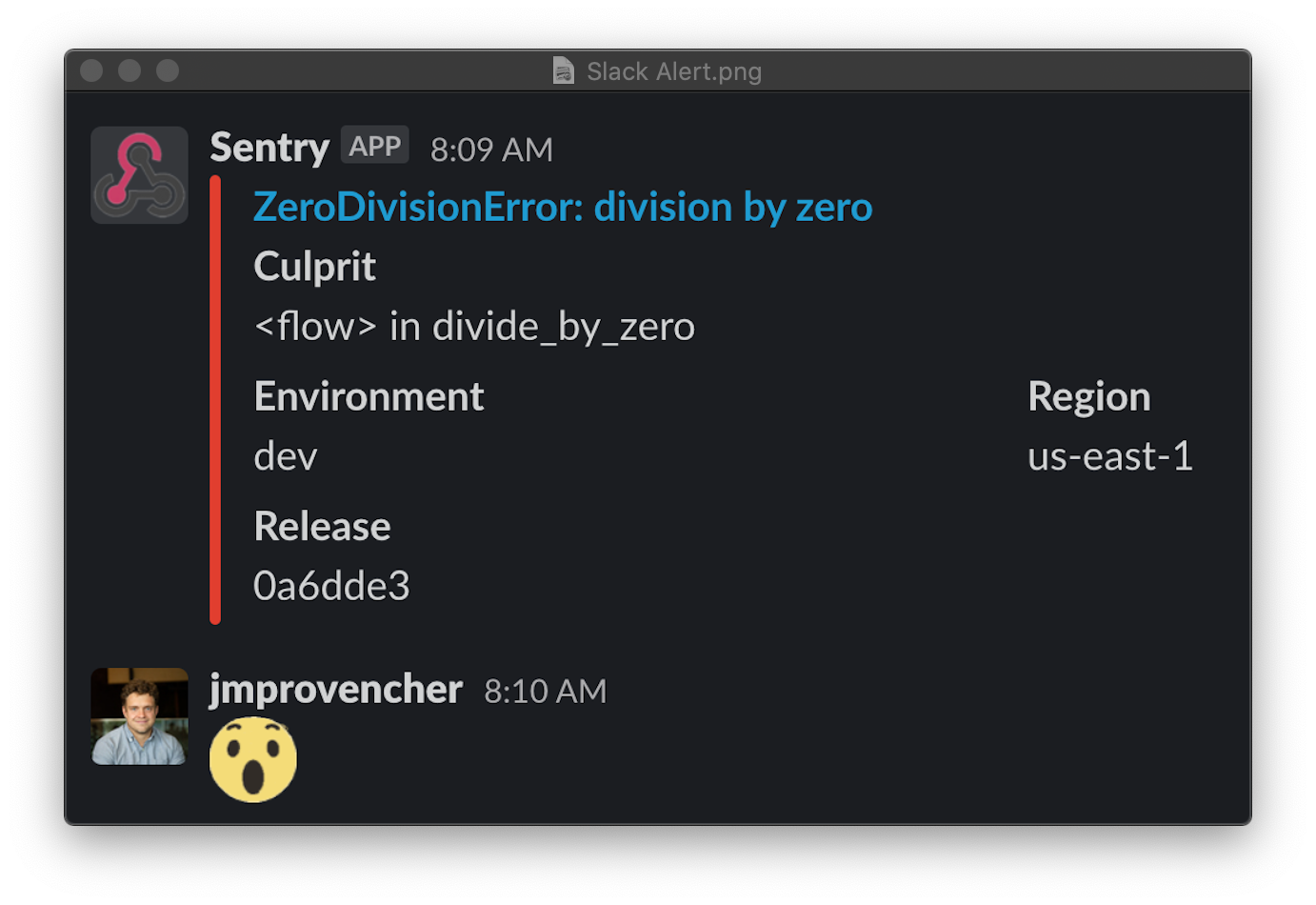 In conclusion, this blog post showcased how Prefect can simplify deploying and running data transformations and scripts at scale in a way that reduces negative engineering. It also demonstrated how it’s possible to integrate Sentry with Prefect to obtain better monitoring on running flows in the cloud.