The MDAPI file structure is how files have been structured for a long time in Salesforce. Those files are sometimes bulky and hard to collaborate on. This is why the Source Format was introduced with Salesforce DX. If your project is still structured around the MDAPI format, switching to the source format might save you numerous bad merge and headaches Here are some resources to help you structuring your project:

A ‘monolithic package’ is a single Salesforce package containing the integrality of your product. A monolithic directory is constituted of a single package directory (a directory containing for example an lwc or object folder).

It contains all the files related to your package in a single folder.

For example, here’s what a simple project with a simple console application with a layout and some Lightning Web Components (a.k.a. LWC) would look like: 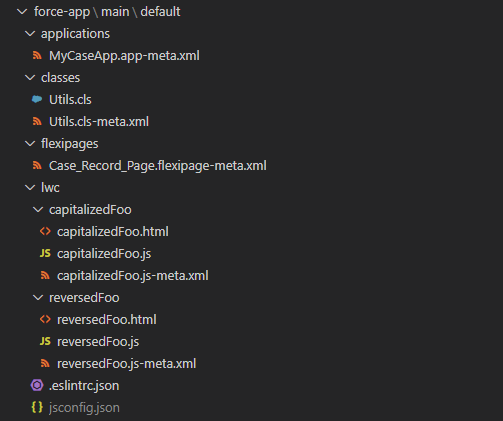 You should check the First-Generation Managed Packages documentation from the Salesforce DX Developer Guide which goes in detail on how to deploy a managed 1st Gen package from the source format.

You should check the Second-Generation Managed Package documentation from the Salesforce DX Developer Guide which explains the release and publishing process of a 2nd Gen package.

If they have some shared code/logic, it could be split in a ‘util’ directory. Also, you can make multiple util directories. However, you should also apply the Separation of Concerns principle to those too.

So if we take the example from the Phase 1, it could be changed to a structure like this:

For this phase, the sfdx-project.json should stay the same and target the force-app folder as a whole:

Even with the files distributed among different folders, the Salesforce-CLI stitches them together as one in the end. Thanks to that, when using sfdx force:source:push or publishing the package, the result will still be the same as in Phase 1.

If you are already using the Second Generation Packaging, there’s nothing new between Phase 2 and this one.

If not, this phase would mostly be the migration from the First Generation Packaging to the Second. However, not much information has been shared on the topic yet apart for an upcoming developer preview.

From there, we’re assuming that you’re using a 2GP.

Finally, to ease the installation burden of your user, you can split your packages into smaller ones.

You should create ‘empty’ packages (later called ‘feature set package’) that group your features per use cases. For example, if one of your personas is supposed to use multiple independent lightning components to have the best experience with one of your feature set, you should:

If the answer is yes, you may want to have a single package for it.

You can also add a ‘demo’ showing how to use them. For example in the case of a record page, you could include a flexipage with your components properly setup.

For backward compatibility, you should create a main package that specifies all the feature set packages as dependencies.

The .placeholder file is just there to ensure Git does commit the folder, you must also add it to your .forceignore file so that Salesforce CLI ignores it when pushing code.

In the end, with our example, it would look like this: