React and Flux are evolving technologies and using them with Coveo was a no brainer for me to get started on them. Here is my take on creating a searchable dashboard with those technologies.

The code of the demo is available on Github

Another JS Framework, another Day

JavaScript is an evolving language and new JavaScript frameworks are born and die everyday (if you are a purist there is always VanillaJS available for you).

As an experiment, I wanted to build an interface to Coveo’s search engine around React web application framework. While learning React, I went all-in and used Flux, a simple web application architecture popularized at the same time as React, which is somewhat different from the traditionnal MVC pattern libraries like Backbone / Marionette.

This project also got me to experiment with other technologies like SVG icons, instead of plain or font icons, and also with the new FlexBox. I also leaned towards ECMAScript 6 for this project and the new features coming in are game-changing (template string, classes, const, arrow function).

For more information about ES6 look at the new features

So let’s try to build a searchable dashboard from what we can get out of our sample documents put together in oursampledocumentation org.

I used the Yeoman generator generator-flux-react to bootstrap a React template application.

React is an interesting technology initially developped by Facebook and then released about a year ago into the wild.

It provides a virtual DOM (document object model), a JavaScript representation of the DOM which we can manipulate freely. What React does under the hood is that when a components render method is called, it perfoms a diff between the previous render Virtual DOM and the new one, and then only modifies the real browser DOM.

React also provides a nice extension to JavaScript called JSX which really eases the use of React. Using JSX is like using html directly into JavaScript.

Here is an example of what JSX can do:

The main elements of React are components which are somewhat like views (in the MVC pattern). They are virtual representations of DOM components with their own state, properties (which can also be event handlers) and lifecycle.

For more information about React, see their website. If you want some React help, there is a nice chrome dev tool addon. Many users have experimented with React and a lot of information is available on the web. I found this page which is a nice wrap-up of tips and tricks about React.

What better way to describe flux than what the projects website tells us?

Flux is the application architecture that Facebook uses for building client-side web applications. It complements React’s composable view components by utilizing a unidirectional data flow. It’s more of a pattern rather than a formal framework, and you can start using Flux immediately without a lot of new code. http://facebook.github.io/flux

The notable thing about flux is the one-way flow of information, which is quite simpler than the MVC model. Of course. you can still use MVC with React, but I decided to use the whole package to form an opinion about it.

The flux architecture is simple and easy to implement.

The flux documentation is extensive and there are a lot of example out there to help you get started with this new architecture of building a web application.

Here are the most notable things that were built : 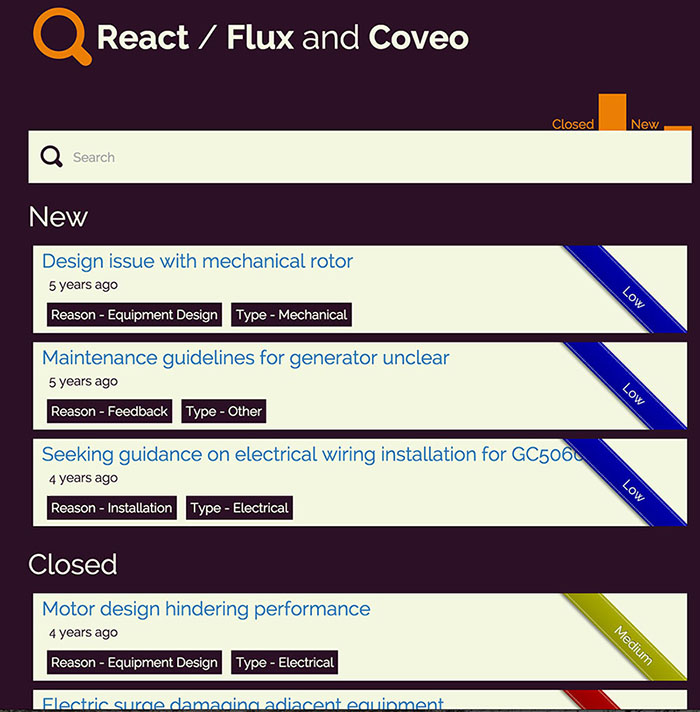 Hope you’ll like reading/seeing the code that’s out there in that demo!

The code of the demo is available on Github

Writing this article helped me understand React & Flux much more. I had to revisit the documentation, which is really helpful, and this made me see and understand what I had missed or what was still foggy from my previous visits.